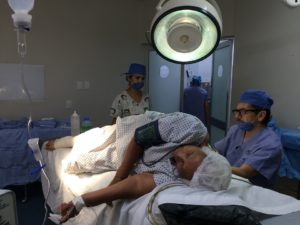 I was at the hospital ready to interpret for a very nervous patient. For almost an entire year, I provided interpreting services for him at doctors’ appointments, physical therapy and even for medical tests.

I was the assigned interpreter when the doctor first ordered tests and prescribed physical therapy. After a while, the doctor attempted injections to relieve pain to no avail. Once all options were exhausted, surgery was the only remaining viable option.

Over the course of a year, I became very familiar with the patient’s vocabulary as he was with mine. The patient grew to trust me and my professionalism, understood me well, and felt a sense of trust. (The Healthcare Interpreters code of ethics requires interpreters to remain unbiased and limit contact with the patient. Some folks feel that the very nature of workers comp interpreting is in conflict with the ethical guidelines. Nevertheless, the service is a reality and must be delt with.)

So here we were at the hospital. The big day for surgery had finally arrived. Soon, the hospital interpreter introduced himself and in a professional manner explained that he would be interpreting everything being said. 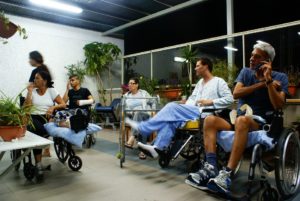 At that moment however, the patient spoke up and stated, “I have grown to understand my workers’ comp. interpreter very well, can he interpret for me instead?”

The patient began to become agitated and demanded my services instead but the hospital interpreter insisted on dismissing me.

I assured the patient that he was in good hands and that he would be cared for professionally. Since I also provided transport, I would wait outside on call and return when I am called.

Within a half hour, I was called back to the hospital to pick up the patient and return him home. The procedure had been canceled.

After I left the room, the patient became more agitated. He suffered a panic attack. His blood pressure escalated. Because of his physical and mental state, the doctor canceled the surgery and rescheduled it for another day.

Afterward, I made an appointment to meet the head of language services at that particular hospital. The discussion was fruitful and resulted in a collaborative spirit. It was determined that for the benefit of the patient, a professional workers’ comp. interpreter could take the lead interpreting as long as the hospital interpreter is present. This way accuracy is assured while at the same time keeping the patient at ease. Collaboration protects everyone’s interests.

Because I cooperated and followed the instructions of the hospital representative, I preserved good will. I chose an appropriate time to speak with the right person in authority instead of unprofessionally making a scene and possible burning bridges.

Hospital procedures are created to best serve its patients. If something isn’t working, it is always best to discuss it with a kind, respectful, cooperative frame of mind, instead of publicly arguing with staff who have no authority to change policy. When dealing with conflict, it is best to choose the right time to speak and speak with tact while showing respect.

1 thought on “When Worlds Collide: Workers’ Compensation and Hospital Interpreters (a personal experience)”