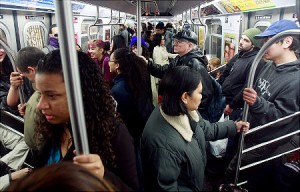 While living in New York, I rode the subway.  One day, like any other day, I entered a busy train and noticed a guy that was going to beauty school with me. I can’t really say that I knew him other than that we spoke on a friendly basis, he was Puerto Rican, and we attended the same school.

I walked on over and greeted him.  We chatted about school and other stuff.  Little by little, he worked his way to the door as we talked, which made sense since he was probably going to leave soon.  When the doors opened, he stepped out and another person in the train followed.  All of a sudden, the classmate pulled something out and lunged towards the other guy, trying to stab him in the stomach. The other guy quickly jumped backwards and barely avoided getting stabbed. He yelled, “he’s got a shiv and tried to stab me!”  The doors closed, leaving the classmate on the outside and a very angry, almost stabbed man on the inside.

Now all his anger was directed at me.  His face was red and he was fuming.  “Your friend just tried to kill me and I’m gonna get you,” he yelled!  I raised my hands calmly and said, “Wait a minute, this is a misunderstanding; I don’t know what’s going on.”  “That’s bull! You know what’s going on! You saw us arguing when you came on the train and walked over to cover his back!”  “No,” I said, “I didn’t realize there was any problem.  I have a class with him recognized him and came over to say hi.  I don’t even know him very well.”   “Bull, you’re his friend and you were backing him up!”

I continued, “Look, this is a misunderstanding. I am a Christian and don’t believe in getting involved in violence. Please, I don’t want to fight with you. I just walked into something and didn’t know.”   At that moment, the angry man seemed to calm down.  He then waived his hand in a downward motion.  Noticing the signal, I turned around to see another person remove his knife from my back and close it up.  The train stopped.  Even though it wasn’t my stop, I immediately exited.  The risk wasn’t worth it.

Even if I believed that I could take that guy, I had no idea someone was behind me with a knife to my back.  Any aggressive reaction on my part could have killed me.  Oftentimes, people take self-defense classes or martial arts (for self-defense). However, what usually happens is that the person develops a certain level of self-confidence.  Sort of like, listen, I don’t want to fight with you, but if you start it I will kick your butt!  This attitude does not promote peace.

As a boy, my father taught me how to box.  I started taking Tai Kwan Do at five years of age.  It bothered my sensibilities of right and wrong and at the age of 11, I spoke to my father and quit martial arts.  As a God-fearing man, I have never been afraid of anyone or a fight.  I just believe that, if at all possible, we should earnestly try to avoid them.

That experience reaffirmed my decision to seek peace; otherwise I would probably be dead right now.